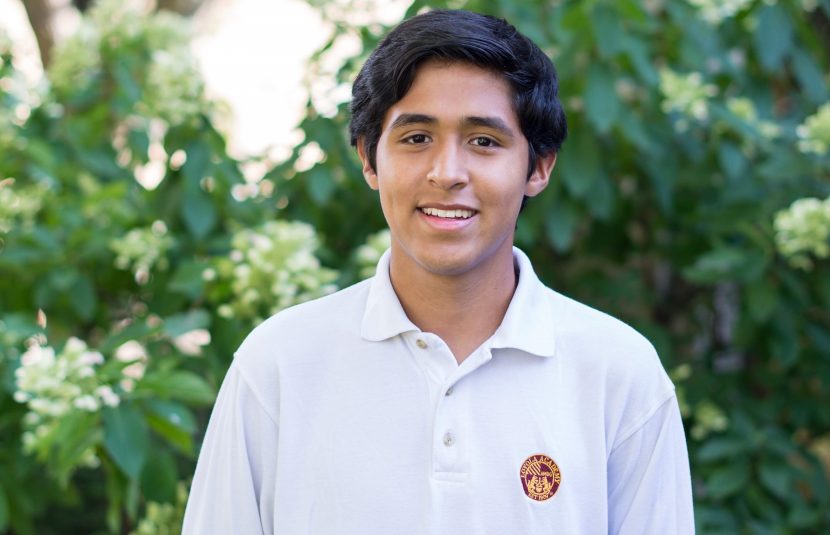 If you need something, they will help you connect to the information or resources you need. Everyone at Boys Hope Girls Hope is willing to help you.

Not many 4th-grade kids map out their own educational paths through college, but Alvaro is no ordinary kid.

In 4th grade, Alvaro decided he wanted a better education. He dreamed of going to a great high school, and his choice was Loyola Academy. He shared this with his single mom, who for many years has worked on an assembly line that manufactures hardware parts. At the time, Alvaro’s three older sisters were finishing high school and gearing up for college. Money was tight, so his mom broke the news that she could not afford private high school. But she also gave Alvaro some advice that stuck with him:

“You have to do everything for yourself. No one will do it for you.”

Alvaro was born in Mexico, and spent his very young years in a small, rural town. When Alvaro was seven years old, his mom received a green card, and they moved to the Rogers Park neighborhood in Chicago. While still in his neighborhood public school, Alvaro heard that a nearby charter school had counselors that helped you plan for your future. Alvaro took the initiative to apply, and in 6th grade, he transferred to Uno Rogers Park Charter School. Next, with his eye on Loyola Academy, he did a Google search for scholarships. He received a prestigious Daniel Murphy Scholarship award, but it was not enough to cover his tuition. So, Alvaro did another Google search and found Boys Hope Girls Hope of Illinois.

Once again, Alvaro took the initiative. He called Boys Hope Girls Hope of Illinois’s program office and spoke to the Program Recruiter, Ms. Tyrina Newkirk. She mailed him an application; Alvaro filled it out on his own and mailed it back. At the time he applied, all three of his sisters were in college on grants and loans, and money was still impossibly tight. In addition, his mom did not want Alvaro to apply — she wanted her last baby at home.

But when Alvaro was selected for an interview, his mom attended it with him to learn more. When Alvaro left for his overnight shadow experience in the Boys Hope Girls Hope residential program, his mom was really upset. Their routine was to have dinner together each night after she came home from work. She knew that Alvaro entering Boys Hope Girls Hope would leave her alone.

By the time Alvaro returned from his overnight shadow, his mom was at peace. She told him she knew that this was a great opportunity for Alvaro and the family. A week later, Alvaro received a call that he had been accepted! That fall, Alvaro moved into one of the affiliate’s homes and began his high school career. Every Sunday, his mom picks him up for church, and then they go to lunch, continuing the routines that meant so much to them both.

Alvaro is now a senior at Loyola Academy. He is an excellent student, plays soccer both for the Ramblers and on a club team, plays the clarinet in Band and Marching Band, as well as participates in the Chinese Club and Hispanic Youth Group. He treasures his time with his mom, as well as his fellow Scholars in the Boys Hope Girls Hope family. When asked what he likes most about Boys Hope Girls Hope, he said he loves all the OPPORTUNITIES.

“If you need something, they will help you connect to the information or resources you need. Everyone at Boys Hope Girls Hope is willing to help you.”

When asked about his favorite Boys Hope Girls Hope memory so far, he leaned in and said in a hushed voice, “Once a year, all the guys stay up past curfew and talk until morning. And we haven’t been caught yet!”

So, what’s next for Alvaro? College, of course — Alvaro had that mapped out in 4th grade! This time, Boys Hope Girls Hope had the honor of helping with his applications. So far, Alvaro has been accepted to Marquette University, Loyola University Chicago, Saint Louis University, and Indiana University.

Alvaro’s future is bright, and he knows he can rely on his Boys Hope Girls Hope network to support him financially and emotionally through college and beyond. Alvaro also has the help and guidance from his life mentor, Jim Seymour. The pair talk through some of the big decisions coming Alvaro’s way and also make sure to have some fun together as well.